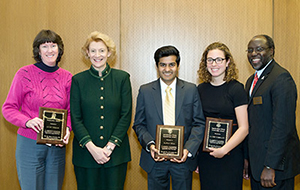 Pankaj Desai enjoyed "rock star" status here on campus with the International Student community, well known for his leadership and promotion of "yesplus", a program to relieve stress on our campus. Pankaj's vision, inspired by Eastern mystical traditions, offers an innovative approach to education and, as such, placed Pankaj on the forefront of global leadership at Appalachian.

In 2013, he presented his study abroad experience at the Appalachian Global Symposium, which highlights global activities by faculty, staff, and students. Pankaj was invited for two consecutive years as a panelist on INTAPP's "Global Perspectives" annual panel discussion on stereotypes, social norms, and cultures from around the world. In his effort to reach out and share an international perspective to the local Appalachian community, Pankaj participated in more than six panel discussions as part of Cultural Agents Promoting Exchange (C.A.P.E.) program and as an AS-U-GO Cultural Speaker here on campus.

Pankaj served as a technology co-instructor on an internship with the Teaching Excellence and Achievement program for 20 international teachers, funded by the U.S. Department of State's Bureau of Educational and Cultural Affairs and administered by the International Research and Exchange Board (IREX).

One of Pankaj's nominators wrote: "Pankaj's passion for education and student success that includes global perspectives on personhood and an embrace of diversity will, I am sure, be his lasting legacy on our campus."

While studying abroad in India, Katie Moravec was a volunteer English substitute teacher, afterschool tutor and a childhood counselor at a K-9 school called Ashalaya. This school gives local children a free education and provides them with textbooks, uniforms, and after school activities. As Katie became familiar with the school's environment, she began to notice the textbooks the children used were worn and not up to date. After a month of fundraising efforts, her family and friends were able to donate just under $1,000.

Then Katie jumped on a plane to Ghana. She spent her summer working for Challenging Heights, an agency that supports at-risk and struggling families to ensure that vulnerable children are protected from trafficking, and child exploitation. Her job was to train and educate an Advocates Group of foreigners who were seeking to learn how to help this organization outside of Ghana's borders.

Katie also spent time in a shelter home, which is the first point of refuge for rescued children, offering a transitional home for holistic rehabilitation, survivor support, aftercare, and love. There she worked as a teacher in the morning and soccer coach in the afternoon. Something that should be said about Katie's character is that she is incredibly humble. She has created ripples within her community and communities around the world, but her peers would never know. She is incredibly compassionate to her core and understands that her work is done from the heart and not for a resume. Her life is devoted to improving the well-being of others, loving individuals unconditionally, seeking challenges in communities, and figuring out how to impact others around her.

She started this program several years ago when she learned that in each summer's class of visiting students from Taiwan there were usually some students who could not afford the large expense of bedding. Some students would bring bedding from home, using valuable suitcase space, and others would try to work out the cost and logistics of buying bedding (to use for only 5 weeks) when they arrived.

For several years now Ms. Ziegler has made it a point to help incoming international students find the household items they need. She reaches out to students that do not have a host family to include them in plans she is making with her own 'officially assigned' students. She is always on the lookout for the less extroverted students that might not be asking for help, and quietly discovers if they have unmet needs. She and her family regularly host group dinners at their home with the goal of helping create connections between various students from different countries. Although she holds a full time staff position, she serves as a volunteer driver for numerous International student day trips, taking vanloads of students to destinations like Asheville and Grandfather Mountain.

Dr. Unal Boya has devoted his career to supporting students in their efforts to gain an understanding of the subtleties of the global workplace in which we live. Dr. Boya was a part of the first Holland Fellows exchange in 1996. He assumed a leadership role in the program in 2000, and has been involved continuously for the past 15 years. Appalachian has a robust presence in China and the Holland Fellows program, and Dr. Boya's leadership in that program, remains one of the foundations of international education here at Appalachian.

Dr. Boya has contributed to many other study abroad trips and/or exchanges with other groups. He has been part of the faculty leadership of at least a half dozen other study abroad programs to Scandinavia, France, Cuba, and Turkey. For a number of years the Department of Marketing collaborated with Aarhus University in Denmark in conjunction with a joint marketing project on the part of students from both universities. Dr. Boya was on the leadership team for the Aarhus exchange for part of that program and contributed in other ways in his role of Chair of the Department of Marketing.

More could be said about each of Dr. Boya's other contributions but suffice it to say that the totality of his efforts have been an unselfish resolve to instill in students global knowledge, appreciation of intercultural skills and global citizenship. In addition to students, Unal's contributions have also positively impacted faculty and administrators at Appalachian. Dr. Boya does this with a supportive and positive attitude toward students and their efforts to venture out of their comfort zone to gain global experiences. For his extraordinary contributions, along with the positive results they have engendered, Dr. Boya was selected to receive the Appalachian Global Leadership Award for 2014.